“According to the madhhab of our Imām A‘ẓam (Allāh be pleased with him), in fact the ‘Ulamā’ Thalāthah (Allāh have mercy on them), Hindūstān is Dārul Islām, and not at all Dārul Ḥarb, since one of the three conditions that are required for a Dārul Islām to become Dārul Ḥarb according to Imām A‘ẓam Imām al-Aimmah (Allāh be pleased with him) is that the rules of shirk are openly operational there and it is not found in an absolute sense that the rules and symbols of Islām are operational. According to Ṣāḥibayn just this is sufficient.

“However, this, with praise to Allāh, is definitely not realised here. Muslims openly perform Jumu‘ah, ‘Īds, Adhān, Iqāmah, Ṣalāh with congregation and other symbols of Sharī‘ah without resistance. Inheritance, marriage, breastfeeding, divorce, waiting-period, revoking [divorce], dowry, khul‘, expenses, child custody, lineage, gift, endowment, bequest, shuf‘ah and many  other such transactions of Muslims are decided according to our bright and white Sharī‘ah. The English officers are also compelled to take fatwā from the respected ‘Ulamā’ and implement and enforce them in these matters even if they are Hindus, Majūs or Christians. With praise to Allāh, this is also the supremacy and the power of the lofty elevated Sharī‘ah, Allāh elevate its glorious rule, since opponents are forced to follow and obey it.” (Fatāwā Riḍawiyyah, 14:106-7)

This is a nonsensical and delusional fatwā. The British did not resort to the ‘Ulamā’ because they were compelled in any way; but because this was their policy, and in accordance with their interests. Their policy was to not interfere in a community’s innocuous ritual devotions. They probably also knew they could win some dim-witted Muslims over by employing such a tactic – and they definitely succeeded with Aḥmad Riḍā Khān! Aḥmad Riḍā Khān even goes as far as to say: “There is no doubt in Hindūstān being Dārul Islām!” (ibid. 14:115)

Aḥmad Riḍā Khān quotes several fiqh passages which he thinks supports his thesis. What these passages really mean is that if Muslims can operationalise their rules by their own sovereignty and power, by their own military might and strength (and not by mere permission), then the land they reside in is Dārul Islām. Aḥmad Riḍā Khān’s view has the strange consequence that western nations like the UK and USA would be regarded as Dārul Islām because Jumu‘ah, ‘Īd and other Islāmic rules are conducted there without any resistance.

For a proper understanding of this matter by a real Ḥanafī faqīh of that era, see Mawlānā Rashīd Aḥmad Gangohī’s detailed fatwā, translated here:

He then quotes a passage from al-Kāfī:

“In this city, the rule of the Imām al-Muslimīn is not operational at all, while the rule of Christian officers is in operation with no fear. The promulgation of the commands of kufr means that in administration and justice, collection of tax and revenue, policing bandits and thieves, deciding disputes and punishing offences, – disbelievers are independently powerful. Yes, there are certain Islāmic laws, e.g. Jumu‘ah and ‘Īd prayers, Adhān and cow slaughter, in which they make no interference; but the very root of these rituals is of no value to them. They demolish mosques without the least hesitation and no Muslim or any dhimmi can enter into the city or its suburbs but with their permission. It is in their own interests if they do not object to the travellers and traders to visit the city. On the other hand, distinguished persons like Shujā‘ al-Mulk and Vilayati Begum cannot dare visit the city without their permission. From here to Calcutta the Christians are in complete control. There is no doubt that in principalities like Hyderabad, Rampur, Lucknow etc., [the British] have left the administration in the hands of the local authorities, but it is because they have accepted the lordship [of the British] and have submitted to their authority.” (Fatāwā ‘Azīzī, Maṭba‘ Mujtabā’ī, p. 16-7)

He then explains that in the time of the Prophet (ṣallallāhu ‘alayhi wasallam) and khulafā’ there were lands that were considered Dārul Ḥarb despite some of the salient aspects of Islām being conducted by the Muslims residing there. 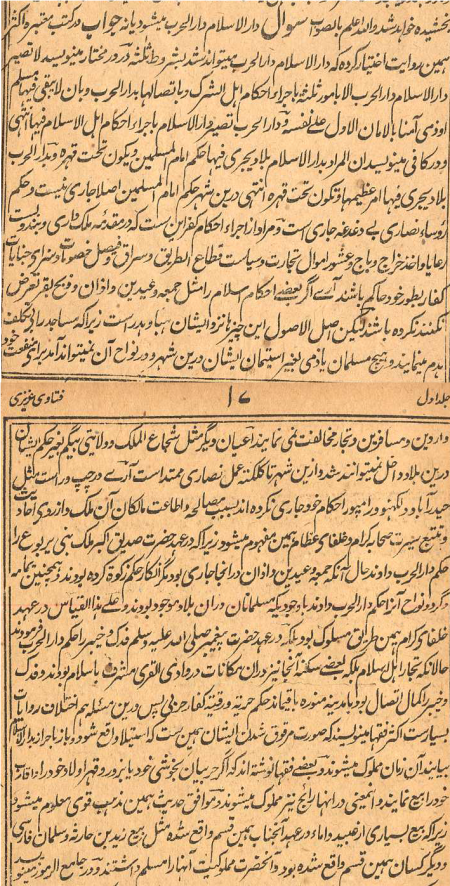 This is an example of Aḥmad Riḍā Khān’s tafaqquh-less (bereft of understanding) “fiqh”, and his departure from the traditional scholarship of India; while the ‘Ulamā’ of Deoband upheld and explained the correct Ḥanafī understanding in accordance with what their learned predecessors taught.

It also demonstrates how Aḥmad Riḍā Khān promoted a clearly Kāfir government as “Islāmic” while denouncing the workers of Islām and great saints and ‘Ulamā’ of his time as “Kāfirs” (precisely the behaviour that would be expected of a munāfiq). (Rāh e Sunnat, p. 7)